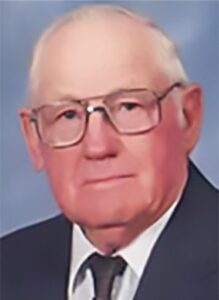 Marvin William Berger was born on October 14, 1929 in Manheim, Texas to Wilheim and Eleanora (Behrend) Berger. He was baptized on October 28, 1929 at his family home in Manheim, Texas by Rev. G.W. Rische and was later confirmed at Immanuel Lutheran Church in Giddings, Texas by Rev. Max Studtmann on April 2, 1944. His confirmation verse was Hebrews 10:23, “Let us hold fast the profession of our faith without wavering; for he is faithful that promised.” Marvin served in the U.S. Army during the Korean War where he served as a construction engineer and with military police. After returning from the war, he was united in marriage to the love of his life, Eleanor Lorane Zoch, on June 26, 1955 by Rev. A. Arndt at St. Paul Lutheran Church in Serbin, Texas. Their marriage was blessed with three daughters. Marvin worked as a mechanic and a rancher for most of his life. He was the owner/operator of Berger Automotive in downtown Houston for twenty-five years before moving back to the area where he ranched for another forty-two years. Marvin was a member of the Paige Community Center and at St. Paul Lutheran Church where he served as an elder and was a member of the BBQ committee. Marvin also enjoyed farming, gardening, ranching, fishing, and baling hay. He enjoyed helping in the community and was willing to help anyone with a vehicle problem.

Marvin passed away the morning of Friday, June 10, 2022 surrounded by family at his home in Paige.

Memorials may be made to St. Paul Lutheran Church in Serbin or to the charity of one’s choice.