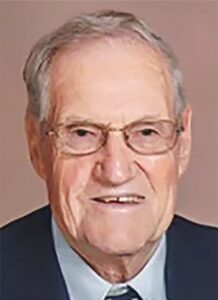 He attended school in the Birdsong Community of Burleson County. Hays was baptized at Communion of Liberty Baptist Church in 1949 and was confirmed on December 21, 1954 at Immanuel Lutheran Church in Giddings by Rev. Max Studtmann. His confirmation verse was Matthew 28:20, “Teaching them to observe all things whatsoever I have commanded you: and, lo, I am with you always, even unto the end of the world.” On September 18, 1954, he was married to Helen Wagner at Immanuel Lutheran Church by Rev. Max Studtmann. They were blessed with two sons, Clayton and Kenneth. Hays began farming when he was a young man before going to work at Superior Dairies as a mechanic. He then went to work at Alcoa as a pot room operator before eventually owning and operating Perry Plumbing in Giddings for over 45 years. He enjoyed deer hunting, fishing, camping, playing dominoes, working cattle, and watching football games, especially the Giddings Buffaloes and the Texas A&M Aggies. He especially enjoyed the family get togethers with the Perry and Wagner families.

Hays passed away the morning of Saturday, February 26, 2022 at his home in Giddings.

Memorials may be made to the Immanuel Lutheran Church Ring the Bell Campaign, the Leukemia and Lymphoma Society, or to the charity of one’s choice.